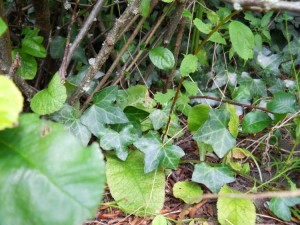 Ivy that is creeping from a neighbouring garden and beginning to get a hold on a Berberis; if left it will slowly throttle the plant.

I think in years to come we gardeners will look back on this as a golden summer. Slugs and snails may have abounded like a biblical plague, eating every lettuce and seedling down to the ground and even starting on things no slug ever eats, such as the rhubarb and potato leaves; the lawn may have grown so long and so fast that the cat gets lost in it, but, as far as West Wickham gardening goes, it has been a wonderful year.

When was the last time you left the hosepipe curled up until August? With our stony soil which absorbs liquid with the enthusiasm of an alcoholic returned from Arabia, we generally find that, from the middle of June, the lawn has the colour and consistency of dried hay and our lovingly tended flowers and shrubs only remain in flower as long as they receive the contents of a small reservoir each morning. Then cometh the hosepipe ban, and we stagger around with watering cans until our arms are stretched to twice their length, and our knuckles scrape along the ground.

But this year, even gardening the stony places of Coney Hall, I have had a green lawn to mow all summer. Shrubs have flowered for weeks; even the Hibiscus, which I almost got rid of, because its flowers season was usually limited to three days in July, is giving sterling service this year. The fillers-in, as I call them, such as Canterbury Bells and California Poppies have produced swaths of colour for a month or more, tricking non-gardeners into thinking I have done some hard work in the flower garden.

However, there is a downside. (Was it ever plain sailing in the garden?) It is not just the flowers and grass that have been growing but the weeds and other unwanted plants as well, and many trees and bushes have been putting on far more growth than is wanted. 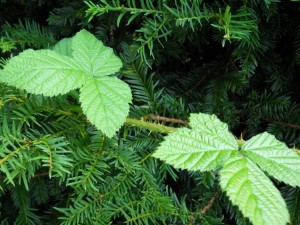 A bramble that has sown itself behind a yew tree.

And in this case a stitch in time really does save nine. Don’t let those weeds flower! Because it won’t be nine that come up from one weed’s seed next year but 99.

If you are too busy to do the weeding and pruning yourself, or beginning to feel that the ground is a long way down and it is even harder to get up, then give me a call and I will do it to your satisfaction. Putting off basic garden maintenance is an expensive mistake, even a small sycamore plant, which can be pulled out in a moment, will turn into a tree that is expensive to remove if it is left in the ground.

While you are about it, get me to have a look behind the shrubs, at the back of the borders, because this is where problems can easily develop unnoticed. 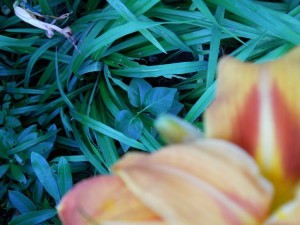 And behind the lilies flower I can see a sucker from the lilac, which needs to be pulled out now, before it becomes stubbornly established.
Enjoy the summer in your garden, there’s no better place!

Please call for advice or to talk about ways I may be to help you care for and improve your garden.